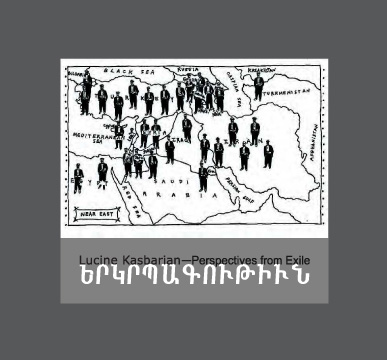 “Kiss the Ground” is a six part exhibition series that examines and celebrates contemporary Armenian art, one hundred years after the 1915 Armenian Genocide. The 6th exhibit and the 7th and final publication in the “Kiss the Ground” exhibition series, Perspectives from Exile examines the political cartoons of Lucine Kasbarian, whose work unflinchingly chronicles the intergovernmental relationship between Armenia, Turkey and the United States of America, the history of the Armenian Genocide, and the persistent denial of those crimes against humanity of over one hundred years ago.

"Kasbarian’s political cartoons reaffirm the validity of the opinion of many critics of “modern” Turkey that the rulers’ mindset has not changed from that of the Ottomans and the Young Turks…This publication deserves wide distribution…"—Keghart.com

"Kasbarian’s cartoons are an exceptional collection of her thought-provoking art form. They are hard-hitting, to the point and edgy. More than just enlightening and being thought-provoking, her cartoons hit your nerve."—Betty Apigian-Kessel, Armenian Weekly. Read the full review.

"My interview with Lucine about her political cartoons and views reflects the true effects of war and genocide on future generations. Growing up in the shadow of the Armenian Genocide shaped Lucine’s psyche, her choices in life, and the missions she set for herself both as an artist and Diaspora Armenian.

"—Jackie Abramian, Artists At War: Testimonies of Creative Minds Affected by Brutalities of Our Times

"Not many Armenian-Americans could do what Kasbarian has done. In fact, one might suggest no other Armenian-American could combine such concise and profound opinions, in this genre, on such topics as: Hrant Dink, the Armenian Genocide, Turkish hypocrisy, corruption in Armenia, and assimilation in the diaspora. Each cartoon leaves the reader thinking. Perhaps Kasbarian’s pointed perspectives leave some of them righteously indignant and others amused, but always intellectually stimulated."—Peter Musurlian, Asbarez. Read the full review.

"Kasbarian’s cartoons illustrate, with black humor, that the injustices toward Armenians still await a proper reckoning and that attempts to belittle or deny Armenian history and rights will continuously fail."—Karin Karakashli, Agos. Read the full review (in Turkish).