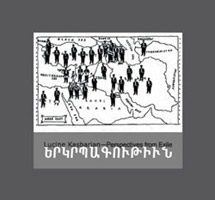 “Kiss the Ground” is a six-part exhibition series that examines and celebrates contemporary Armenian art, one hundred years after the 1915 Armenian Genocide. The 6th exhibit and the 7th and final publication in the “Kiss the Ground” exhibition series, Perspectives from Exile examines the political cartoons of Lucine Kasbarian, whose work unflinchingly chronicles the intergovernmental relationship between Armenia, Turkey and the United States of America, the history of the Armenian Genocide, and the persistent denial of those crimes against humanity of over one hundred years ago.

Read more about this book here.

A 2013 Nautilus Silver Award winner in the Children’s Picture Book category.
Chosen as an Honor Book in the 2012 Storytelling World Resources Awards
The Greedy Sparrow was among the Armenian books recommended on War & Genocide in Children’s Literature.

The Greedy Sparrow is available for purchase through:
(Lucine strongly supports independent booksellers* and encourages you to buy through them.)

Professional Storyteller Roger Jenkins reads The Greedy Sparrow…brought to you by KidsREAD: Empowerment through Learning and the National Library Board of Singapore: 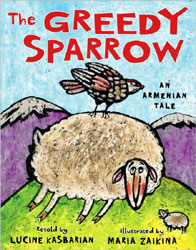 “In Zaikina’s bold, folk-style illustrations, both characters and landscape are heavily outlined in black, and the characters’ dialogue is in speech balloons. Pictures are lightened with bright, textured colors (they were made with oil paint and layers of wax) and have an appealing, vigorous heft. Armenian folk attire and references to places in Armenia authenticate the tale. It’s a rhythmic read-aloud beginning readers can share.”—Kirkus Reviews, March 1, 2011

“Based on an Armenian fable Kasbarian heard from her family, this story about a trickster who is out-tricked is a good choice for reading aloud…The humor and action in the large, bright, black-lined print illustrations will appeal to young children, as will the triumph of kindness over cheating.”—Booklist, February 2011

“Zaikina’s lost-wax illustrations resemble thick-lined woodcuts and adroitly portray events that might daunt modern readers, as when the bridegroom decides to slaughter the dolefully funny sheep for kebabs, or agrees to give up his bride to the sparrow–a scene in which the sparrow carries the sheep while flying is sure to draw laughs.”—Publishers Weekly, February 21, 2011

“The sparrow’s trade-ups involve leaving each of his gains for safekeeping with someone along the way who then ends up having to pay a forfeit…Zaikina’s expressive portrayals of both animal and human characters, rendered in bold outline and rich color, beautifully convey the tale’s goofy fun. Her use of wax and oil paint in a kind of scratchboard technique

“I like to keep track of my favorites from one year or another, and this year The Greedy Sparrow will be topping the list. Fun to read. Fun to look at. This one?s a beauty through and through…”— Elizabeth Bird, Senior Children’s Librarian, NY Public Library for Fuse #8 Production Blog on SchoolLibraryJournal.com

“This classic Armenian fable (Crime never pays! is the lesson at the end) is retold to the accompaniment of richly chromatic, folkloric scenes by a Moscow native that bring to mind Ukrainian Easter eggs.”—ForeWord Reviews, March 2011

“In an original story using Armenian folklore characters, the titular bird parlays the thorn a kind baker removes from its foot into items of increasing worth (bread, a sheep, a bride) – until the creature’s satisfying comeuppance…”
—
The Horn Book Guide to Children’s and Young Adult Books, October 2011

“I recently had the chance to read this story with a class of second graders, one of whom happened to be a shy Armenian boy and, I later learned, a struggling reader. He was excited to be hearing a story he knew from home. Later, the teacher told me how much the same student pestered her to get the book and how he enjoyed reading it to his classmates. The teacher also witnessed his confidence to read other familiar books. At the end of the school year, the teacher saw him choose to read a book during free time; that was a first for him and, for a simple folktale picture book, a big result.”  read more  —International Journal of Multicultural Education, 2013

“"A family bedtime story handed down through generations has transformed into a vibrant picture book. The large pages with bold illustrations are eye-catching, and the text is dynamic in its simplicity—a great authentic folk-tale for story time."—Bookbird: A Journal of International Children’s Literature, April 2013

“The authenticity of this story as part of Armenian oral tradition can be traced to author Kasbarian’s great-grandmother, who was a celebrated storyteller within her culture. During the Armenian Genocide in the early 20th century, the author’s family was driven from Armenia carrying only their property deeds and their knowledge of the songs, dances, foods and other cultural artifacts that represented their heritage. Retelling traditional stories such as The Greedy Sparrow provided one way to maintain a piece of Armenian culture for generations that followed.”  read more  —World of Words, 2013 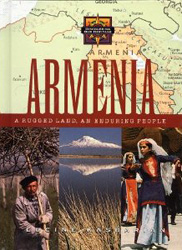 Critical Reviews:
“The descendant of survivors of the 1915 Armenian Holocaust, Kasbarian devotes much attention to this horrific event that has until recently received too little coverage.”—Lyn Miller-Lachmann for Multicultural Review

“Beyond the consumer market, Armenia is sure to find shelf-space in schools and libraries as a rare research tool for the “middle-aged” student.”—Armenian International Magazine [AIM]

“This comprehensive introduction to Armenia past and present is informative and interesting.”—FACES magazine: People, Places and Cultures

“Kasbarian’s [book] is an easy read, augmented by striking photography, large type, a casual flow, and chapters which tend to cradle civilization through a discerning eye.”—Tom Vartabedian for The Armenian Weekly

“The first thing I noticed was the way Armenia made history – so often the subject of dry, turgid, massive tomes – a lively and uniquely interesting experience.”—Roben Torossian for The Armenian Reporter

“Armenia takes us closer to filling the void of mainstream educational materials addressing the history of Armenia and Armenians.”—Nicole Vartanian for Armenian Forum

“This supplementary reader for high school age students is excellent for all ages.”—Project SAVE News